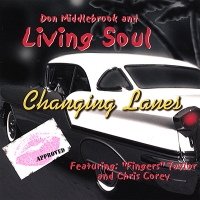 Don Middlebrook and Living Soul announce the release of their eighth CD, Changing Lanes. Known for their feel good warm weather Caribbean sound, this 12 song journey focuses on the changing and challenging times we are living in. As Middlebrook states, “In this crazy and dramatic world that we see unfolding everyday in our lives, a songwriter should recongnize that today, more than ever, the world is an oyster bed of material to pull from. We are in a critical moment in history. Drugs, sex, and rock and roll are not enought to carry an artist or a listener. The bar has risen and writers must rise up to the bar and tackle these “in your face” issues that continue to cause such world wide high alert. I believe our CD does that and it doesn’t hold back and that I’m proud of.”

If the song and the lyrics are the cake, the players are definitely a three layer frosting. Chris Corey, Living Soul’s keyboard player for the last three years has blossomed into one of the finest keyboard players in the Mid West. He is able to set the mood of the various stages Middlebrook’s compositions go through. Greg “Fingers” Taylor, who toured and recorded with Jimmy Buffett for 26 years and James Taylor for 4 years adds his famous harmonica sound that is peppered throughout the CD.

The title cut, Changing Lanes along with Marco Polo in a Car will be featured in a Showtime Original later this fall. The season and the new CD promise to be one of Living Soul’s best yet.

Eleven years ago, Living Soul began as a duo singing their way up and down the coast of Michigan. A little Buffett, a little James Taylor, and a whole lot of fun has turned into quite an adventure.

As of this year, Living Soul will be completing their eighth CD entitled Changing Lanes and the band has blossomed into a powerhouse of musicians. Chris Corey has been added on keyboards for the last three years and has been critically acclaimed as one of the top keyboard players in the Mid West. A special attraction, Greg “Fingers” Taylor, who toured and recorded with Jimmy Buffett for 26 years and James Taylor for 4 years, peppers his harmonica throughout the bands performances and recordings.

Singer, songwriter, Don Middlebrook, has penned all the bands original work and this year’s CD, Changing Lanes, should be one more step up the ladder for this hardworking talented group.

Two songs from Changing Lanes have already been slated for a Showtime Origianl film that will be realeased later this year. The band has already booked their traditional stops for the summer and have included additoinal tour dates in Wisconsin, North Carolina, Ohio, Illinois, Maryland, Indiana and two tours down to Key West, Florida.