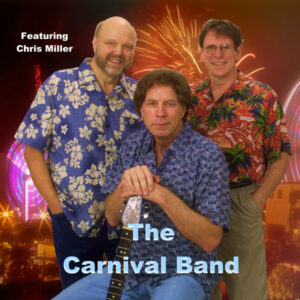 The Carnival Band AKA “Carnival”, was originally formed in 1973 by Jerry Powell and three other veteran musician/singers, in answer to a need for quality music and variety entertainment in the 6 night-a-week hotel-chain, lounge circuit!

From that day on through around 1980, Carnival enjoyed tremendous full-time, 6-night a week success…at one point having been booked two and a half years in advance! Their strong emphasis on tight vocal harmonies and their versatility and comedic interaction, featured in their nightly floor shows made them a big hit no matter where they appeared!

Carnival’s first appearance on the Atlantic Coast was in the Summer of 1974 in Myrtle Beach! It left an indelible impression on both sides! Powell describes it this way; “At most all the hotels we worked, the week started on a Monday. The lounges were usually closed or no entertainment on Sundays and most Mondays were more relaxed! We walked into the lounge and it was wall to wall on our first night there! We finished the first song and the audience went wild! I had never seen anything like it…and it just got more crazy after that! I realized then how that region and culture, had such an appreciation of music and entertainment!”

Carnival had gone through several personnel changes over the years, and the last iteration featuring Chris Miller on vocals and keyboards, Eric “Packy” Marrero, sax, trumpet and vocals and the original founding member, Jerry Powell on guitar and vocals, is, (along with several associate members), The Carnival Band…the group responsible for “Carolina Shore”, written and produced by Powell as a tribute to that special area and the unique Beach Music culture and to those who comprise it!

“This is a win-win!” says Powell. “We believed in this song from the get-go and to have it climbing the charts and being played all over is a great feeling, knowing that people like it enough to want to hear it over and over and respond positively makes you feel good! It’s like being able to give back to that area and culture for all the great times we had there!”